Bellevue Arts Museum is delighted to present—for the first time in the Northwest—the art of the Chicago-based painter Nicole Gordon (b.1976).

A painter of hallucinatory lucidity and skill, Gordon’s large-scale canvases meticulously depict a liquid dreamscape world of all-too-solid fantasy. Drawn from post-surrealist archetypal images of wood-paneled rooms, pensive children, deserted carnival rides, or empty urban landscapes, her compositions are then seemingly run through a super-saturated sci-fi/skate-punk/psychedelic perception filter. In a record scratch, figures become their own negative, the bucolic suburban rambler is beset by pink flamingos or giant redwoods, and the world beyond the abandoned skatepark erupts into deadly flame.

Gordon’s versions of our reality are continuously fluid—past, present, and post-human future intermingling with a primal and pre-conscious state. In a contemporary adaptation of the autonomous techniques of 20th century surrealism and the tie-dye aesthetics of EDM’s Second Summer of Love, Gordon’s paintings depict prescient worlds that could only exist far into the depths of the subconscious, or perversely, at the same time, a barely glimpsed movement at the very corner of the eye. In surrendering to the luxury of these images, we are invited to take a new look at the universally accepted conventions that underpin our reality, and wonder, not for the first time, whether the greatest artists need not paint what is real, but only what is true.

In addition to a suite of new paintings, Gordon will be showing sculpture and installations, asking the viewer to experience a two-dimensional work in entirely new ways. 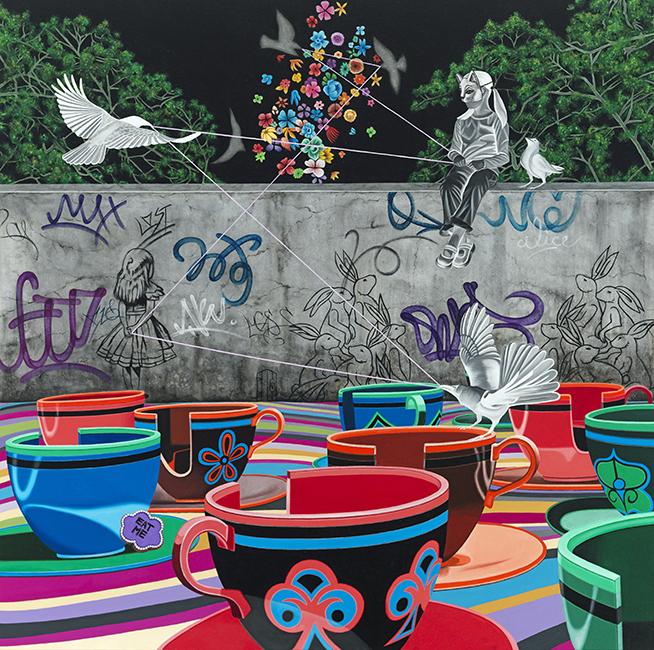 Who Left the Kettle On?

The Altered States penguins took advantage of the empty galleries during BAM's COVID-19 closure to explore their own exhibition. Check out the video to take a virtual tour of Altered States and see the penguins get into some mischief in the galleries.